GitOps is a term first coined and popularized at Weaveworks. GitOps can in it’s most concise form be described as a philospohy or a workflow on how infrastructure and application code changes/deployments should be applied to a desired state where Git is the single source of truth. GitOps is not limited to Kubernetes but in the Kubernetes ecosystem we have specialized tools that can easily helps us implement GitOps due to the already declarative nature of Kubernetes manifests.

In this guide we will build a complete GitOps workflow on Kubernetes using ArgoCD as the GitOps engine and orchestrated from Github Actions as the CI part.

What is GitOps and why it matters

The pillars of GitOps are:

In Kubernetes two popular GitOps tools are ArgoCD and Flux. Both are installed in Kubernetes and they are configured to watch one or several Git repos storing declarative Kubernetes manifests. Whenever someone pushes changes to that repo the tool will take action to update the cluster accordingly. In other words we are using Kubernetes to update the Kubernetes cluster itself! (think push vs pull) 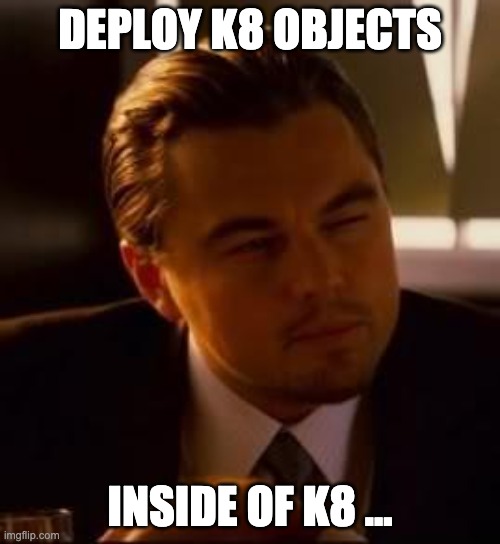 To be honest when I first read about GitOps I scoffed at it, to my ears it sounded like someone was trying to reinvent CI/CD with a new buzzword. However after working on large Kubernetes environments I can definitely say that GitOps is THE best way to manage Kubernetes objects and application deployments. Here are some arguments why:

To sum it up: one of the more difficult things i experience when working with clients are what part of the terraform/cloudformationkubernetes/ansible are actually applied and to which AWS account / k8 cluster. With GitOps that confusion mostly goes away.

With the theory out of the way lets review what prereqs we need to get starting on our GitOps workflow:

You can use this Git repo to follow along this guide, easiest way is to just fork it.

With a Go application as a starting point we will use GitHub Actions for the CI part (compiling the application and build a docker image). We will use Kustomize as the tool for managing the Kubernetes manifests and lastly ArgoCD as the GitOps tool to orchestrate our application deployments. The pipeline will look like this:

Kubernetes (Kind) and ArgoCD setup
After installing Kind and kubectl we can boot up our cluster. Use the following configuration when initializing the Kind cluster (or just use the kind-config.yaml provided in the repo):

Now we can set up Kind, Ingress and ArgoCD with these commands:

Head over to localhost:8080 and login with admin and password from the last command. We’ll come back to Argo UI in a bit but first lets talk about the Go application and it’s k8 manifests which will be handled by Kustomize

Go Application and k8 manifests
Our Go application is fairly simplistic, I’ve left out the imports and the main function. As we can see below we have two http endpoints, the root endpoint (helloArgo) will output a json response with the commit id the application was built on. For that we’re using the Version variable, in the compilation step we’ll inject the git hash so “dev” is just a placeholder.

The Dockerfile is fairly basic (see below). It’s a multistage build, where we’ll compile the source code in one container and transfer it to a tiny scratch image.

Sync ArgoCD with our Git repo